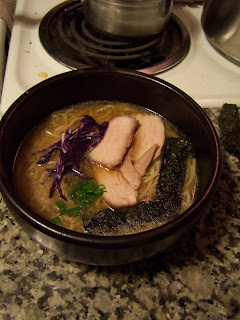 Yesterday was a good day. I made a decent bowl, which was quickly consumed by me! 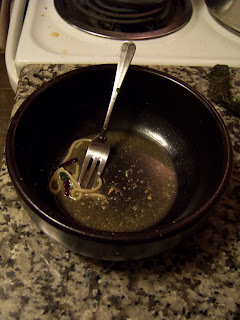 I have always been a fan of forks, but after hearing Brittany scrape the bottom of my bowl, I think I will give chopsticks another try. I must say this Ramen tasted better than the bowl I had at Yuzu down the street. They charged 8.50 for their bowl, I was thinking a flat fee of 5 dollars would be fine, but I am getting ahead of myself, as I often do. Those noodles are prepackaged from Winco, they tasted pretty good, but I still need to work on my own.

As this broth was simmering, I would stare at it, trying to understand what the broth was doing. I really liked how the leeks encompassed the pot, surrounding the other vegetables with strong flavors. I am glad I finally added them. 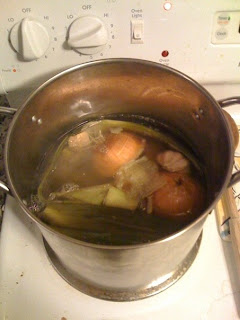 I bought some miso paste that's fermented locally. It was a few extra dollars but I think it is worth it. I did add some of this paste to my latest bowl and am currently trying to think of a way to easily dissolve the paste in the broth. I was trying to avoid a vigorous stirring since that would emulsify the fats and proteins in the broth, but as you can see in the first picture, my broth is quite cloudy. I used a few pounds of ham hocks as my base, even with an extremely quiet boil my broth is quite cloudy. The ham hocks have quite a bit of fat on them, perhaps it is time for me to visit a local butcher to pick up some less meatier bones. In the Ramen films there is often a reference to an entire head of a pig. I wonder if they simply throw the head in the broth or cut it up first. I would most definitely need a larger pot before I even consider this addition however. In the end I might just go with a nice thick cloudy broth. 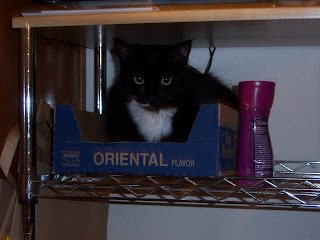 Posted by Benhamish at 9:48 AM