Its all about the broth

Yesterday I picked up some neck bones from Safeway. I hadn't planned to buy them, Safeway normally does not carry bones. At least that's what I was told by the meat department manager whose name escapes me at the moment. But there they were. 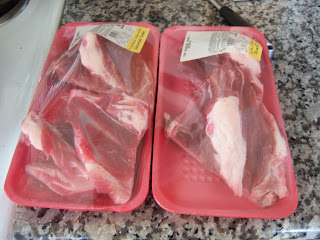 I tried cutting these into smaller pieces but I just don't have the knife for it. So I have added a large knife to the list of things I need to obtain. The list is growing and I expect it to get longer the closer I get to opening my Ramen shop. I still haven't decided about working out of a cart or setting up shop in the vacant lot nearby behind the Asian market. I plan to do a few sample nights in my apartment, that's going to be fun. But before I can do that I need to obtain a huge stockpot, propane burner etc.. not to mention keep working on my recipe.

But back to the bones. I boiled them today and was a bit disappointed in the flavor I obtained. The broth I made with a few ham hocks from Winco was much tastier. Those had some added salt and smoke flavoring. I didn't need to add any salt to the ham hocks broth, but I did need to add some to the neckbones. I could tell there was something wrong after a few hours when I wasn't tasting any good flavors. I turned up the heat a little in the hopes of releasing some flavor and let the broth finish. 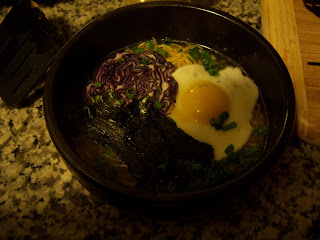 The fried egg is a recent addition as well as the intact slice of red cabbage. I enjoy the crunch that the cabbage gives to my Ramen. The egg is from a local farmer, we got 2 dozen of them and they are the best eggs we have ever eaten. Its frightening to think what is happening to the chickens at those industrial farms to make them produce the garbage they sell in the supermarkets. Its simply cracked open onto a hot skillet for 3 minutes and then flipped into the Ramen. I like how it looks and tastes, but I am wondering if the egg needs something more to it. Or should I keep things as simple as I can? You might note the absence of sliced pork, don't worry it will be back.

This Ramen was ok, I won't be using those neckbones again though. A few recipes online mention using pork and chicken bones for the broth, but I think I am going to try using ham hocks again. I still need to work on my noodles. I haven't worked with any flour for over a week. It appears that in order to get noodles to the right consistency you have to add a few chemicals to the mix. Namely potassium carbonate and maybe some sodium carbonate. These carbonates were most likely present in the well water the chinese used to first make their noodles all those thousands of years ago. So once I obtain some chemicals I will start working with my dough again. Interestingly though, the noodles I bought at Winco did not list carbonates as an ingredient. They did have eggs though, which I have tried using as well. I think it's going to take a bit of time before my noodles taste how I want them to.
Posted by Benhamish at 10:56 PM